Children Around the World Celebrate Christmas 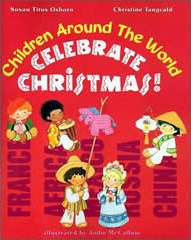 At New Hope Preschool we read the children a story during circle time every morning. In December, we have been reading a two-page spread each day from  Children Around the World Celebrate Christmas

by Susan Osborn. The children love it!

The book talks about Christmas celebrations in ten different countries. For each country, a fictional child introduces himself and his family, tells what he likes about Christmas, discusses his country's Christmas traditions, and tells how to say "Merry Christmas" in his language (with phonetic spelling).

Then come  a few pages describing how to do some of the activities the children mention in the book. These include a Mexican pinata, Norwegian Christmas pudding, French clay figures, and Sri Lankan paper chains. The preschool children were very interested in these, especially in the clay figures. We didn't have time to make them here so I'll share the instructions.

How to make French clay Christmas figures (santons)
New Hope Preschool students are free to borrow this book (after we finish with it this week). If you want to buy it, it appears to be out of print but amazon in both the US and Japan do have copies. See below.